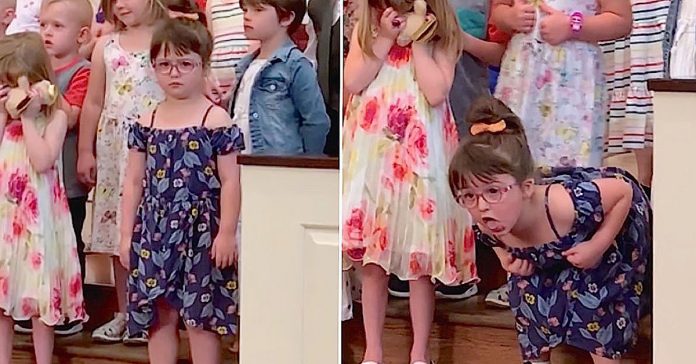 If you’re reading this, you’ve unarguably been a child before. As such, you might recall loving to do silly things like bust out in dance spontaneously during your childhood.

If you’re a parent, you’re doubly familiar with how much children love to dance.

Her grandmother Martina likes to use the saying, “Give her an audience, she’ll give you a show,” to refer to how much her granddaughter Lily likes to dance.

Recently, a video of Lily dancing as part of a preschool class stage performance went viral and made its rounds across the World Wide Web, generating thousands of likes, shares, comments, tags, and retweets, and other interactions on social media platforms.

Lily, who just graduated from Lebanon Presbyterian Church in Ohio, danced and sang alongside her preschool graduate pals to a catchy, upbeat children’s song by the name of “Tooty Ta.”

Lily’s preschool teacher had tried – a key word being tried – to choreograph a simple dance for all of the church’s preschool graduates to perform for church attendees, parents, family members, and community members.

However, Lily stole the show by dancing to the rhythm of her own drum.

Virtually everybody in attendance cheered for Lily and laughed their heads off watching her.

In just two days, Martina managed to rack up 12 million views on her clip of Lily’s performance on Facebook alone.