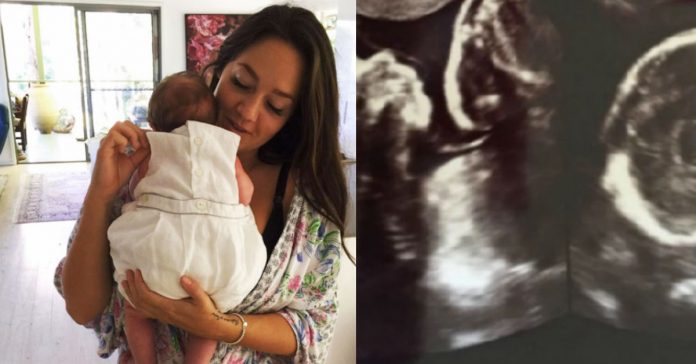 Eliza and Ben were thrilled when they found out they were expecting their first child.

It had only been three months since they began dating, but the couple, being so in love, could only look forward to the future with happiness.

On top of that, Ben had always dreamed of being a father and was absolutely thrilled with the idea of creating a family with Eliza.

Eliza delivered a lovely, healthy and happy daughter not even a year into their relationship, and they were extremely thrilled and excited.

Still, they knew they had a lot to do and learn, and as all parents know, handling and caring for a newborn is no easy task.

Eventually, Eliza started to think that parenting duties were taking a toll on her body. She was experiencing constant fatigue and felt exhausted.

But Eliza recognized this “off” feeling her body was experiencing. Her body was telling her what was happening, but her brain and all logical thought dictated that this couldn’t possible be true.

Many of her friends and family suggested that how she was feeling was just tiredness from being a new mother, but she knew this feeling – she was feeling pregnant, a mere six weeks after the delivery of her daughter.

She knew it sounded completely strange and impossible, but she also knew there was only one way to be sure.

She headed out to purchase some pregnancy kits and tests. She took the first one and it came back positive.

But even though she stared at the results and felt what she was feeling, she couldn’t believe it, so she took more tests: four more times.

Each one revealed the same thing: she was, indeed, actually pregnant once more.

Eliza took a trip to the doctor and found out even more incredible news. Not only was the pregnancy confirmed, but she wasn’t just going to be delivering one baby, oh no – she was having twins!

Of course, this shocking news came as a complete surprise to Eliza and Ben. The news was definitely exciting, but also very daunting.

Imagine just starting to learn the ropes of parenthood, only to be expecting twice as many kids again so soon!

But the couple took it in stride and simply prepared for what lay ahead. They cared for their daughter and worked on preparing everything for two new bundles of joy.

With immense strength, Eliza did fantastically for 36 weeks of pregnancy, and she delivered twin boys: both healthy and beautiful!

They were named Wolfe George Harry and Jack Antony Richard, and thus, a new chapter in the couple’s life began!

Eliza and Ben’s life had certainly undergone quite a huge transformation since their first days together, and they wound up with three children all younger than one year old in their home.

Although they’ve only been together for a little over a year, they’ve already been through so much and the strength of their love for each other speaks for itself! (Ben has actually just proposed to Eliza, so they’ll be tying the knot soon!)

Eliza’s life might be hectic, but she loves her family and documents lots of her adventures on her blog, which is entitled Twingenuity. You can check it out here.

Eliza now documents all her motherhood adventures on her blog which she called “twingenuity” in just a little over a year of their relationship, it’s hard to imagine that the couple would have gotten this far.

But that’s life, always sneaking up on you when you least expect it.

SEE ALSO:
Doctors Are Besides Themselves Over Birth That Happens Only Once Every 480 Years