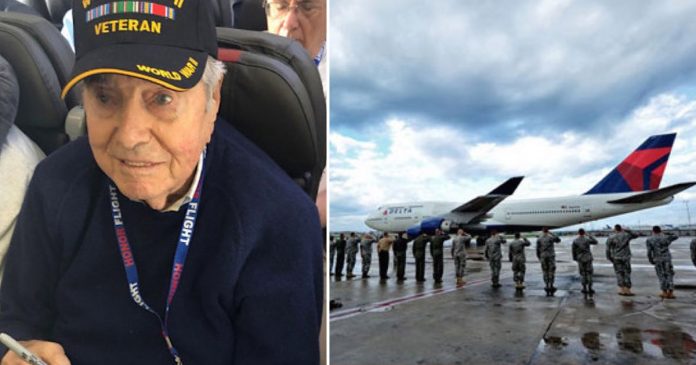 Frank Manchel has served in the U.S. Army as a sergeant. He took part in World War II.

Recently, he traveled to Washington D.C. from California. All expenses were catered for by Honor Flight San Diago.

Manchel was very excited that he was traveling to Washington D.C. to see the war memorials courtesy of Honor Flight San Diego, a non-profit organization.

Other veterans also get to enjoy the same privileges as Frank Manchel.

Frank boarded the return flight on May 5, 2019. He was happy to spend the weekend at Washington D.C., and it was now time to get back to San Diego.

During the tour, he was also able to engage some of his past friends as well as new people that he met while touring the military museums.

Eighty-two other veterans took part in the tour. They were accompanied by their caretakers, loved ones, and volunteers.

As the flight came to an end, Frank Manchel was in high spirits. He was also conversing with the other passengers. Manchel collapsed all over a sudden.

His son Bruce was helping in any way he could. Another physician also began to administer CPR. Unfortunately, Frank Manchel died on the spot.

He passed on during an amazing weekend where he also made new friends.

It was such an unfortunate occurrence. Manchel was a true hero, and as a former member of the U.S. Army, his body was covered in A U.S. flag.