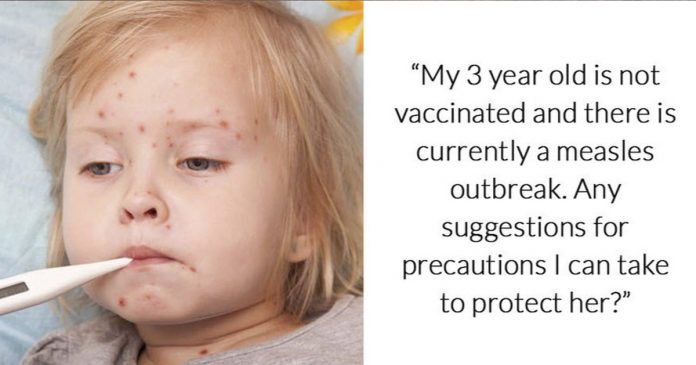 As the anti-vaxx community grows larger, the debates surrounding the topic grow more and more heated – especially as more preventable disease outbreaks begin to happen all around the world.

People on one side of the argument, influenced by an old study that has since been disproven, fear the vaccinations will give their children autism.

They also see the rare cases of vaccine injuries that occur in those vaccinated and fear that their kids will get them.

There’s also the chance that they don’t quite understand the ingredients in vaccinations, leading them to believe some of them are harmful.

Some even go as far as to blame the medical industry for lying in order to gain more profit from patients.

Meanwhile, on the other side, people are insistent that vaccinations are made mandatory in order to prevent outbreaks of preventable diseases.

After all, numerous studies and medical professionals back up these claims, and the results speak for themselves.

Preventable disease outbreaks have decreased heavily, and even individual cases were nearly non-existent – until the anti-vaxx movement came into full-swing, of course, and the cases climbed back up again.

Considering the fact that this is literally a life-or-death situation, it’s not surprising that people are passionate about this.

This topic also happens to be one of those where, if an argument gets sparked, it’s time to bring out the popcorn.

That’s exactly what happened when this Washington state mother posted on a Facebook group for members of the anti-vaxx community.

This mom was concerned because a measles outbreak was taking over Washington, but her three-year-old child was unvaccinated.

She wanted to ask others in the group how she could take precautions and keep your little one protected from the disease without getting her vaccinated. 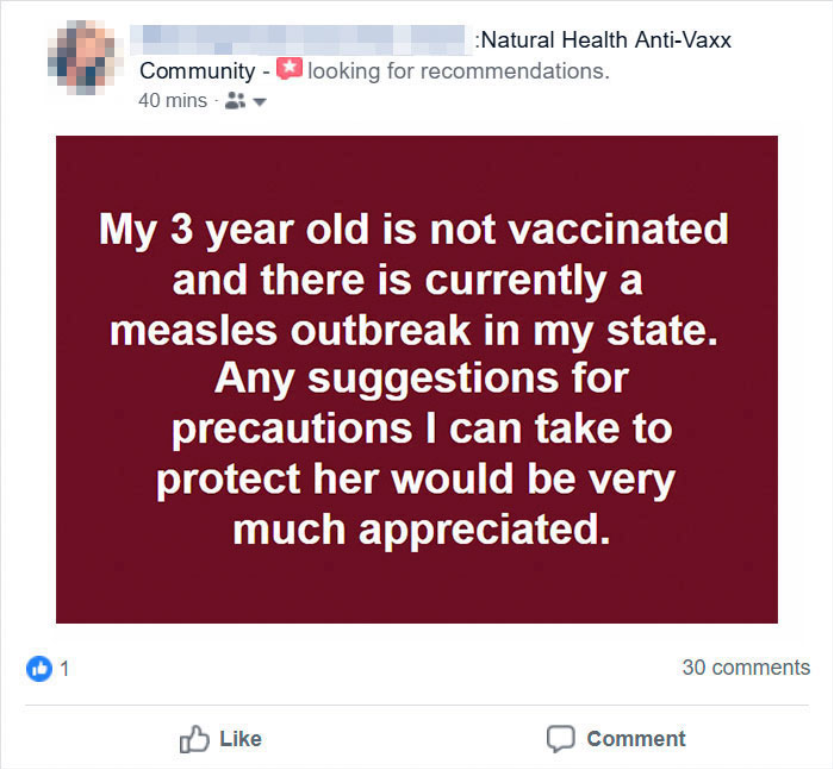 Of course, there was no way this was going to end well.

Before long, the comments were flooded with people snapping back in sarcastic and downright savage ways. 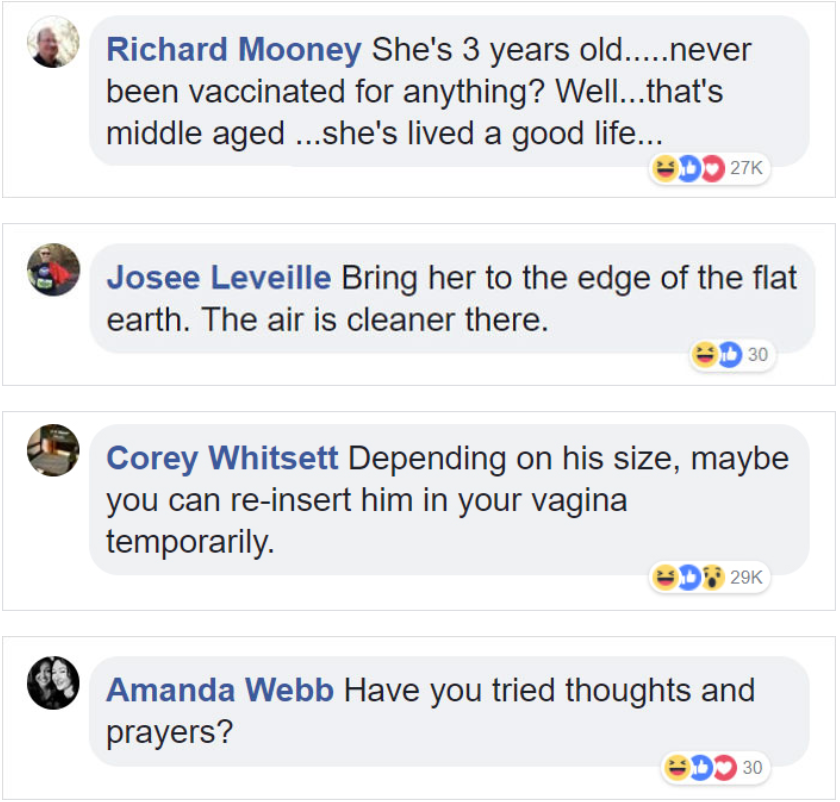 Some made jokes about her doctor’s limited lifespan, saying she is already middle-aged at 3 years old considering her expectancy.

Others referenced other common conspiracy theories, like flat earth. 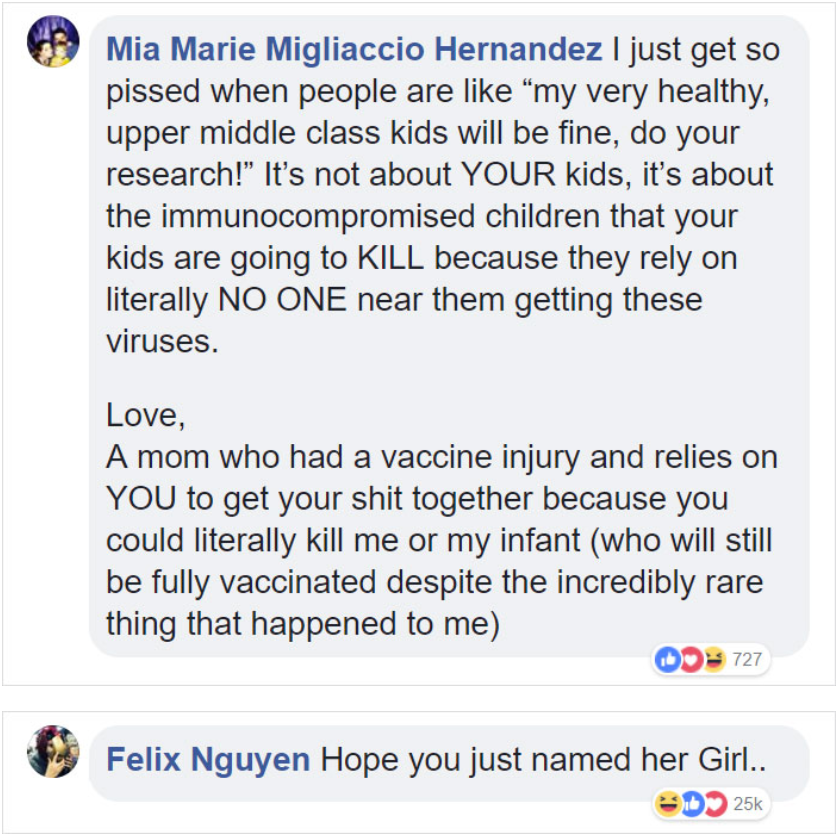 Some took this mom’s lack of knowledge very seriously and tried to educate her, explaining how herd immunity works and trying to tell her how important vaccinations are. 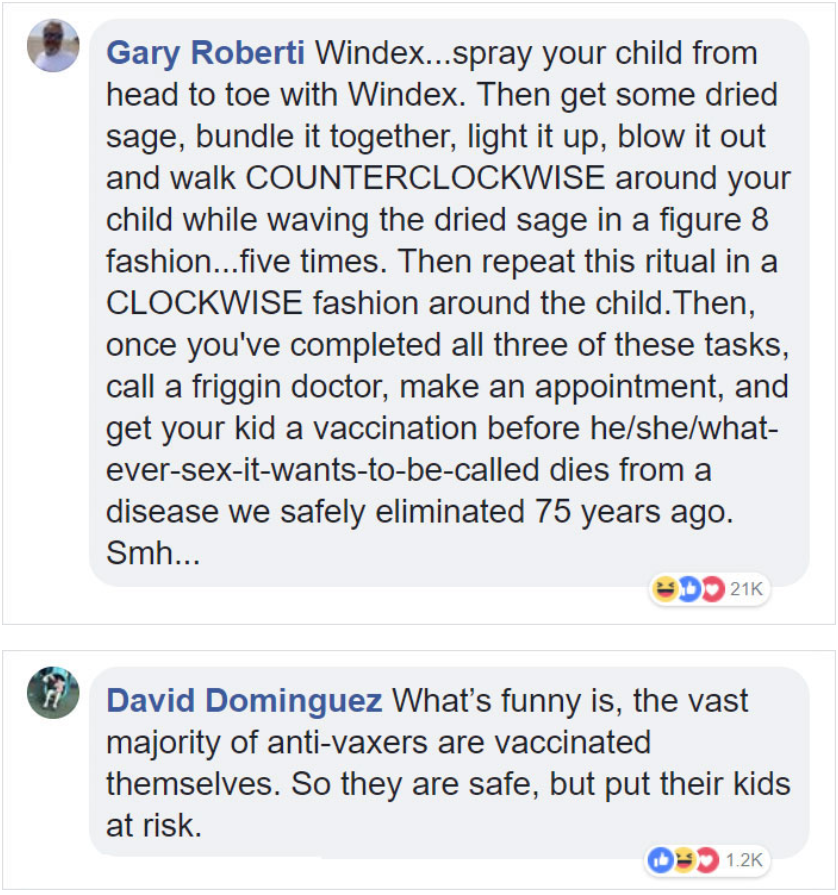 More still made unhelpful jokes, encouraging her to use Windex, hot sauce, or dumping her in rice to help. 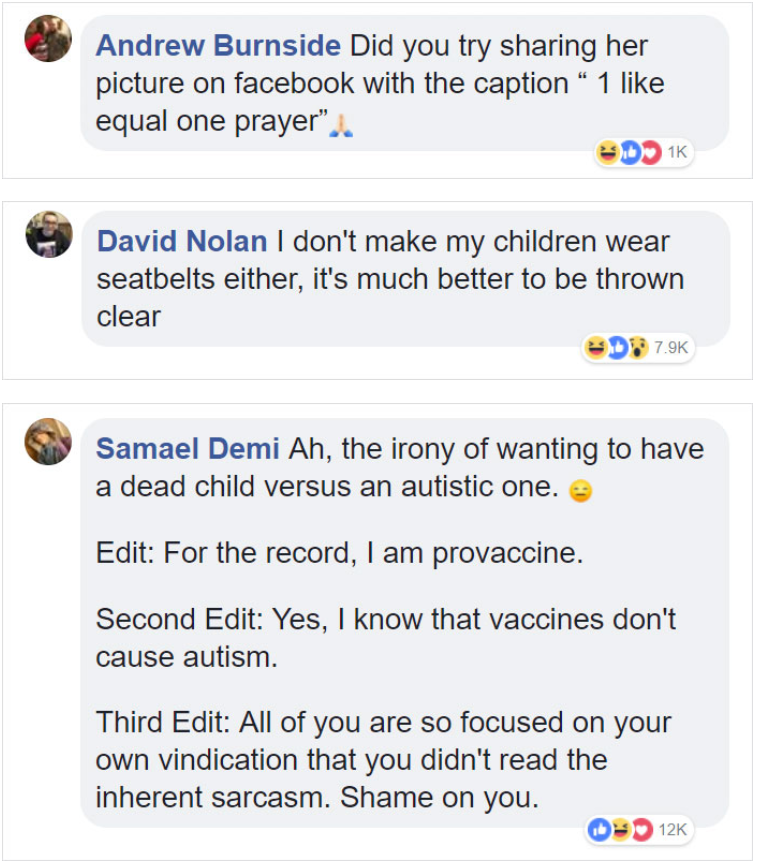 Some were saying she should share her daughter’s photo and asking for thoughts and prayers, or try turning her child on and off again. 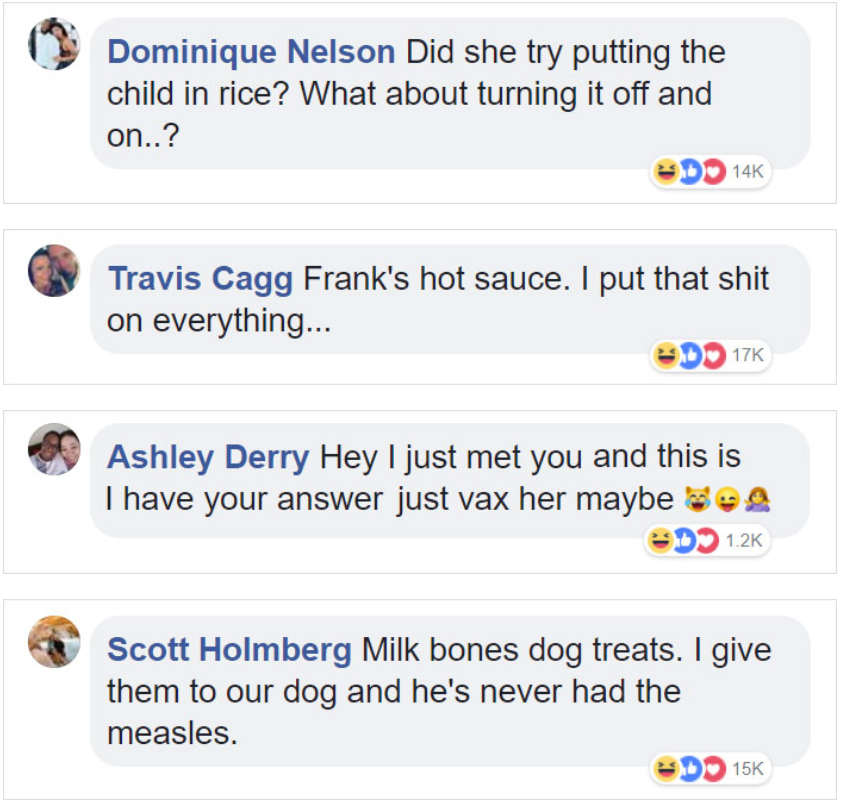 Some parents of kids with autism, and even those who did have vaccine injuries, even stepped in to speak up and talk about how vaccinations are extremely important.

Many pointed out the hypocrisy of preferring a dead child over one with autism. 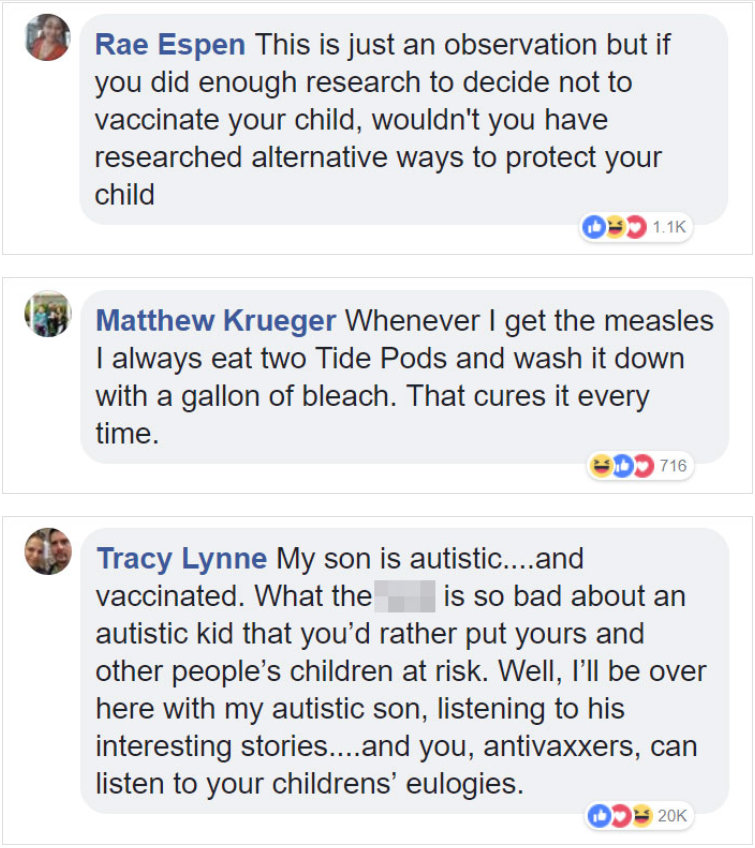 These hilarious responses show that the mom received exactly the schooling she deserved.

The mix of sarcasm and dark humor with genuine anger and desperation, these replies are a treat to read through. 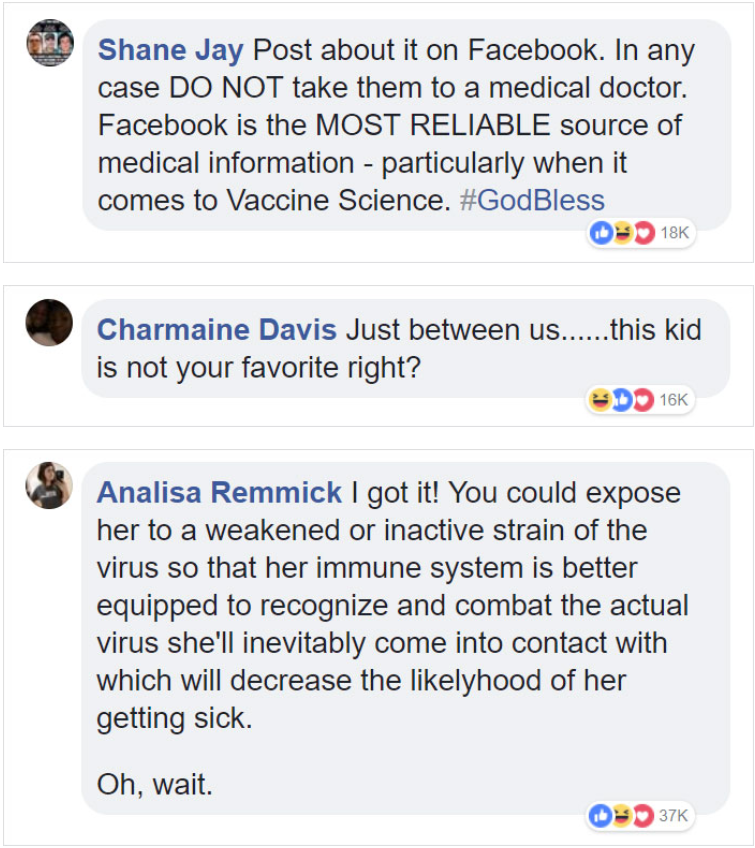 We certainly hope they got through to this mother, and that she’ll be getting her daughter vaccinated.