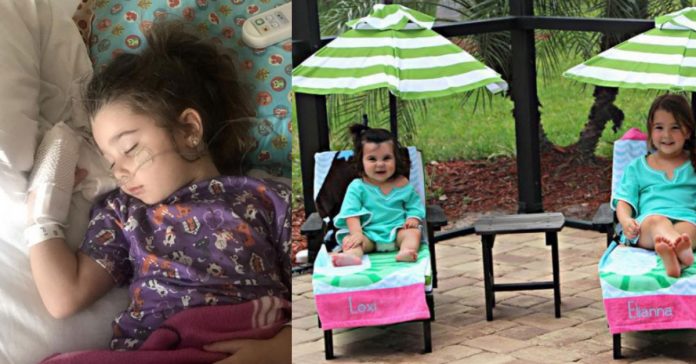 Children love to play in swimming pools, accompanied by toys and floats of all kinds. It’s a fun and seemingly harmless activity that most young kids are happy to indulge in.

Still, parents know all too well that freak accidents or mishaps can turn a great day into a nightmare, and they’re always keeping their eye on their children as they play.

For Lacey Grace, even her watchful eye couldn’t prepare her for what was about the happen with four-year-old Eliana, her daughter.

She and Eliana were at Eliana’s grandparents’ home, and Eliana was playing with some friends in the pool.

Pool water shot directly down poor Eliana’s throat. She began to choke and cough, immediately throwing up the water. In half an hour, everything was back to normal and Eliana carried on playing.

Lacey watched her and monitored her, and over the next two days, Eliana seemed completely fine. But unfortunately, that was far from the end of the story.

Two days after the incident, Eliana got a fever. Naturally, Lacey knew it wasn’t unusual for a child to develop a fever so she didn’t think much of it.

The day after that, Eliana went straight to school and seemed fine, in fact, but she had to be sent home halfway through the day when her fever came back in full force.

Lacey suddenly realized that something serious might be wrong, and she recalled reading a news story about a young boy who had passed away after ingesting water from a swimming pool.

After picking Eliana up from school, she took her immediately to a doctor.

She hoped her hunch was wrong, but within 10 minutes of being examined, the doctor immediately instructed that Eliana be rushed to the nearest ER.

She had low oxygen levels, her skin was going purple, and her heart rate was incredibly high – all signs of chemical infection.

An x-ray found her chest was infected and there was inflammation there, and she had to be taken to a bigger hospital.

Eliana was diagnosed with aspiration Pneumonia and was placed on oxygen so she could breathe.

She was given doses of antibiotics and her condition didn’t improve much from them.

It was so serious that she had to be carefully observed for 24/7. Her fever continued, but eventually, her heart rate began to lower back to normal again.

Doctors are very sure that if Lacey hadn’t remembered that story from the news and rushed Eliana to the hospital, she may have been lost, especially since symptoms would have taken a while longer to be visible.

Lacey now seeks to warn all parents about this potential danger and advises them to seek medical help if their child swallows pool water.