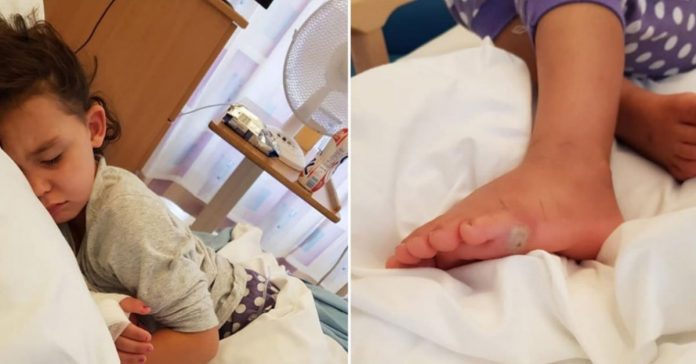 Parents will do everything to keep their children safe from harm. But sometimes, mishaps and accidents can creep up and there isn’t anything one can do to prepare for them.

Jodie Thomas, who hails from South Wales in the United Kingdom, didn’t expect that a day out to try on new shoes with Sienna, her young daughter, would turn ugly so quickly.

They enjoyed a fun shopping day, but then, the day after that, 4-year-old Sienna fell ill and was in such awful constant pain that she couldn’t stop crying.

She was shaking uncontrollably and twitching, and she had an incredibly high temperature.

Jodie decided to bring Sienna to the hospital, and doctors realized that a severe bacterial infection had taken root on Sienna’s foot and was already rapidly spreading around her body.

Sienna had been infected with potentially lethal sepsis, and doctors were going to have to perform an operation on her foot.

But how did Sienna even contract a deadly sepsis on her foot?

According to doctors, and much to Jodie’s shock, she had likely gotten it from trying on new shoes.

Sepsis occurs when the bacteria that causes it manages to seep into an open wound. Even just a tiny cut is enough.

Sienna had been enjoying her shoe shopping and been unaware that something she’d tried on contained the dangerous bacteria.

Luckily, Sienna had been brought to the hospital in time to be saved.

Doctors drained out the infected pus from her foot and leg and administered an antibiotic drip to improve her condition.

Still, she needed to spend five days lying in bed in the hospital in order to recover safely, as the infection was fast-spreading and highly life-threatening.

According to Jodie, Sienna usually has socks on when they go shoe shopping, but due to the hot summer weather, she’d been wearing sandals and therefore had only her bare feet.

Now, Jodie wants to caution others about the dangers of trying shoes carelessly, especially since you have no way of knowing who else has tried on those shoes and where their feet have been.

Sienna has been able to go back home after the infection cleared, but she will need to be monitored and will need to attend a number of check-ups after.

Now, it’s crucial that this is a lesson you don’t have to learn the hard way.

Sepsis can affect virtually anyone who has been exposed to the bacteria in any way.

The next time you’re shoe shopping, make sure you have stockings or socks on in order to protect yourself.

You’ll also be able to guard against other conditions, such as athlete’s foot, by taking these protective measures.

It’s not just a problem that can affect children – even adults should be wary of sepsis.

Look out for symptoms such as an extremely high fever (or a very low temperature), fast heart and breathing rates, and visible signs of infection.

More severe sepsis can lead to organ failure and septic shock, so it’s not something to take lightly.

SEE ALSO:
Someone In Her Child’s Daycare Refused To Get Vaccinated, Now She Has To Bury Her Son