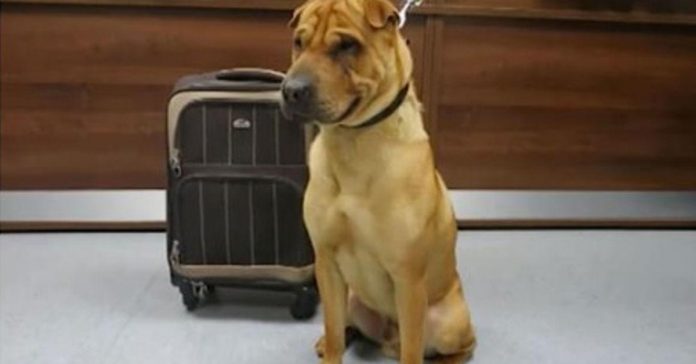 He was discovered stranded and tied to a suitcase filled with such items as toys, a pillow, a food dish and some pet food. He was given the name Kai.

The photos of this lonely and abandoned creature, whose one eye required immediate medical attention, soon went viral.

Animal lovers from around the globe expressed their outrage that this poor, defenseless dog would have been treated in such a callous manner.

Under Scotland’s Animal Health and Protection Act, passed in 2006, it is a federal offense in that country to abandon animals.

Anyone arrested and found guilty of such cruelty is prohibited from ever owning other pets.

When SPCA official checked to see if Kai had an implanted microchip, they discovered he did and that led them to an individual who claimed they had sold the dog three years ago.

No one could come forward with any information about who actually owned Kai or who might have abandoned him at the station.

Several months after photos of Kai appeared online, a mother came forward, claiming she had agreed to purchase the dog.

But when she arrived at the train station, the dog she saw was totally different than what she had seen in the advertisement.

Before she could protest, Kai’s owner ran to his car and sped away.

The woman, accompanied by her asthmatic daughter, panicked and also left, leaving Kai behind with his suitcase of favorite things, all alone to fend for himself.

Animal officials then went to work finding Kai a suitable home with a caring owner who would never abandon him again.

One loving owner stood from among the hundred of applicants who asked to adopt Kai, who finally found the forever home he deserved in the first place.