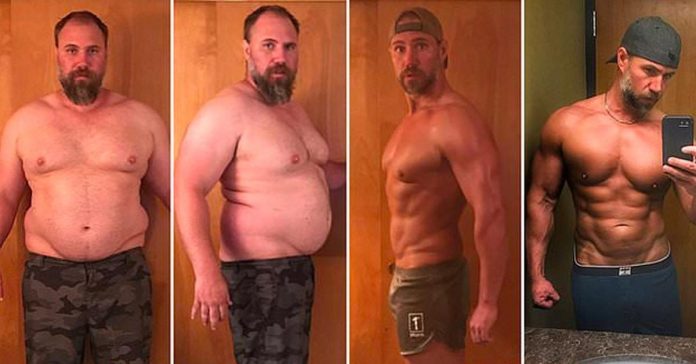 We see loads of people all over the Internet celebrating over weight loss successes and incredible body transformations.

Jeremiah Peterson is one of these people – but the reason behind it is all the more impressive and touching.

This 39-year-old father, who worked as an antique dealer, lives with his family in Montana, including 3 children aged 9, 7, and 6.

At the time, he was overweight and easily tired, something he didn’t think about until he realized that he could no longer keep up with his kids.

One day in August, Peterson went for a mountain trip with his family.

As his children ran around, he tried to keep up with them, but he kept running out of breath and needing to rest ages before his children needed to.

The fun, happy memories he made there were badly marred by the fact that he had to spend so much time trying to take breaks so he wouldn’t collapse from exhaustion.

That’s when Peterson knew he had to make a change. He refused to put his tiredness aside as a symptom of aging.

He knew he was overweight and unhealthy, and he wanted to be able to spend more time with his kids – something he couldn’t do in his condition.

So he put in the work, and now, he looks incredible.

Peterson knew he wouldn’t be able to handle going to the gym every day, so he decided that he would hike for three hours on a daily basis.

He began taking part in a ketogenic diet, which is essentially a high-fat, low-carb diet. He eats absolutely no carbohydrates aside from vegetables.

Within 31 days, Peterson had lost 21 pounds. He slowly began incorporating other activities to his fitness routine – tire flipping, weights, and, eventually, gym time.

He soon developed a routine – a 45-minute hike before work, another one after work, and one hour of strength training with weights daily.

Peterson’s appearance began changing dramatically, and not just when it came to muscles body tone! His skin and hair began looking shinier and healthier.

His beer belly receded and he saw a slimming waist and hard abs begin to appear. His jawline became more pronounced.

He also says his energy levels and mental health have improved along with everything else! In just 150 days, he’d shed a shocking 82 lbs!

When you look at a picture of Peterson now, you can also see that he looks much younger – almost like he’s a totally different person.

Back then, you might have put his age at around 50, so ten years older than he really is. But now, he could likely pass for someone in his early thirties, or even his twenties!

His old self looks like it could be his current self’s dad – that’s just how dramatic the overall change is.

Peterson says he was mainly motivated by his kids, but that he also was motivated by the fact that he saw results and wanted to keep seeing them.

He’s since become a fitness coach who offers a variety of training programs.