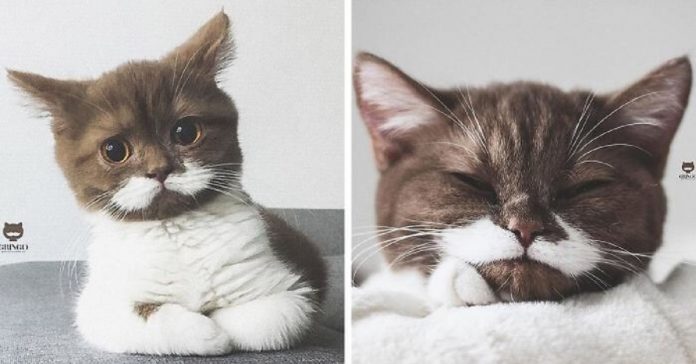 British Shorthair cat Gringo is a celebrity and influencer in his own right. The kitty is one year old and lives in France with his owners Romain and Sabrine, and another cat named Milko, who he is best friends with. They’re completely inseparable!

Gringo is a very bright and happy cat. He’s got a lot of life in him and he likes to get in trouble. He’ll spend the whole day playing, clawing on curtains to climb them, jumping through his owner’s plants, and giving the sofa a good scratch.

He also loves food, like many cats – so he tries to sniff dinner plates for remnants, and he even uses the kitchen sponge as a chew toy when no one’s looking!

But why is Gringo so popular? Well, Gringo has a very sophisticated and elegant mustache!

Though he’s a playful, mischievous, and energetic cat, his appearance gives him the appearance of a well-to-do gentleman from the Victorian era.

After his old Instagram account was hacked at around 60k followers, Gringo is now building up his audience base again. You can follow his adorable adventures here – or just take a look at these 31 adorable pictures of him!

3. Gringo may not be able to do fancy tricks, but he can go through this ring if you cheer for him!

4. Looking dapper as ever – all that’s missing is a top hat!

5. Basking in the glorious sunshine…

8. When Gringo first entered his forever home, he was just 3 months old!

9. According to his owners, Gringo loves to stand on his hind legs and stay that way for a while – just like a fluffy meerkat!

12. Paired with that bow ties, there’s no way to say no to that stare.

14. How can you resist those eyes?

17. Please Mom, can I have some food? Pleeeeaaassseeee?

20. Is Gringo the world’s first cat to ever hatch out of an egg? It’s a biological miracle!

22. Here’s a dramatic picture of Gringo hatching a scheme for his next big act of mischief.

24. Who knows what lies in the world behind the window?

26. Perched precariously (but prettily!) on a table’s edge!