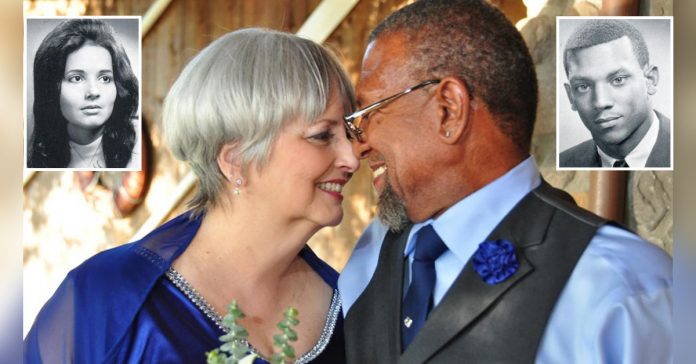 While many of us tend to relegate love stories to romance novels and fairy tales, the story of Howard Foster and Myra Clark may soften even the most skeptic among us.

The year was 1967 and these high school sweethearts were deeply in love. Unfortunately for these lovebirds, racism took its toll on their plans for their future.

The pressure of a black man in love with a white woman resulted in a warm, but painful breakup.

Howard recalls, “I remember just sitting in my car and crying, because it was not an easy decision. I really did love her.”

Despite his love for Myra, Howard felt that the racism the couple faced demanded that their relationship end. His decision left him filled with heartache and regret.

Though the separation was a friendly one, the two would not see or speak with one another over the next forty-five years.

Myra recalls waving goodbye to Howard but thinking that she would see him later.

Howard and Myra went on living separate lives, but they never ceased to think of one another. While Howard married, and eventually divorced, Myra never married.

She remained single knowing that her heart belonged to Howard, despite their years apart.

Fate intervened, however, when in 2014, the long-lost lovers were reunited by a mutual friend.

Their reunion made both Howard and Myra realize that the love that had once existed between them was still alive and well.

Though it was obvious that much had changed, it was immediately evident that their feelings for one another had not.

Howard vowed that this time around, he would not let racism have its way.

“For me, the fact that I was sitting there holding her hands is something that I thought would never happen. And I was not letting her go,” Howard said.

On August 1, 2015 Howard was true to his word as he finally married his high school sweetheart decades after their painful separation.

Though the couple lives with some regret over the years lost between them, they live each day as if to make up what could have been.