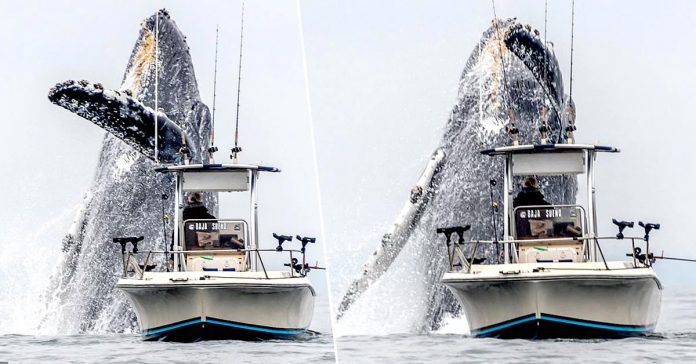 Douglas Croft, 60, and Kate Cummings, an avid whale watcher, captured images and video of a huge humpback whale jumping in Pacific waters right off the coast of California.

While Monterrey Bay is a popular whale-watching spot, Croft and Cummings could not have predicted the spectacular act they were about to witness.

In the images, Croft can be seen standing in his boat, Baja Sueno, which looks tiny next to the gigantic mammal.

He stands in shock as he witnesses the rare and awe-inspiring display by this gentle giant.

In an interview, Croft mentioned that the whale had breached the water several times, and the fishing boats in the area were watching closely.

When whales are swimming in the waters, fisherman usually move to a new spot, but Croft was there to see the whales.

Coincidentally, he went below deck to the boat’s porthole to take pictures of the whale just as it jumped.

The amazing angle of the image captures the whale’s spectacular size and beauty.

Cummings, the whale watcher on board Baja Sueno, said that when whales breach multiple times, it is because they are heading in a specific direction to build momentum for the next breach.

Because the whale’s breaches were coming towards the fishermen, she suspected the whale would soon come closer.

However, she never expected the whale and the boat to line up so perfectly!

Imagine being this close to one of nature’s biggest animals!

Chances are most people will never see a humpback whale this closely, but thankfully we have these amazing images to view from afar!