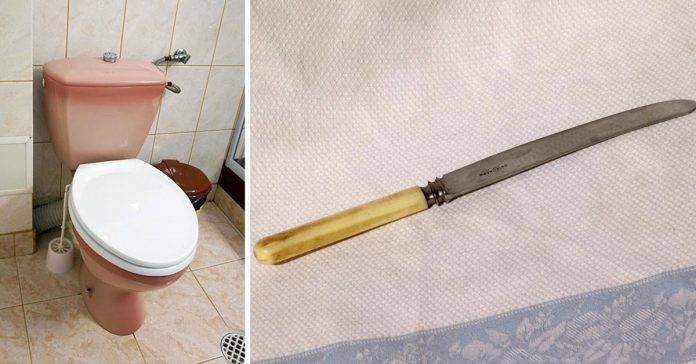 A member of Reddit, who goes by the username LearnedButt, shared a peculiar story about his family’s quirky habit.

This one entailed a story about poop and it’s going viral because it’s unusually interesting and funny.

LearnedButt shared in the community board that everyone in his family takes massive dumps. It’s the kind of waste that can clog the toilet too often.

The man, who’s now in his 40s, has no idea if this is due to genetics or their diet but since his childhood, he has learned to manage the clogging using what they call a “poop knife.”

This poop knife is a common tool in their household and it’s used for one specific purpose.

When a family member uses the toilet to take a dump, they bring along this old and rusty kitchen knife that hung in the laundry room.

It was never used in the kitchen for obvious reasons.

LearnedButt grew up believing that all families have a poop knife for their bathroom.

So, one time, when he was 22 years old and staying over at a friend’s house, he used the toilet and left a giant log.

He was pretty sure that this thing won’t flush unless he had a poop knife to break it down.

So, through a crack on the door, he called out to his friend and asked where they placed this special tool.

Confused, his friend asked what a poop knife was so LearnedButt thought that maybe they called it a different name.

As he explained why he needed it, his friend started giggling until the rest of his group heard the whole story.

LearnedButt realized that not every family has a poop knife.

It’s just something that his parents decided to use, along with a plunger and the toilet brush.

LearnedButt also explained that his dad was kind of thrifty even if they lived in an upper-middle-class neighborhood.

He shared the story of the poop knife to his wife after his dad passed away and she ended up laughing too hard that she teared up and tried to catch her breath.

The guy also found out that his wife been using his poop knife, which he keeps in the utility closet.

Thankfully, she doesn’t bring this to the kitchen and just uses it for opening packages.

To be fair, however, Generation X and Y in the U.S. grew up with weaker toilet systems compared to today.

Technology was limited back then and water conservation was hardly an important need.

To prevent toilet clogging, some families buy powerful toilets from abroad but most contend with what they can use locally so clogging was a lot more common than you realized.

Other members of Reddit sounded off and shared similar stories.

One commenter said that they used a “Shatula” (spatula) to clear the clogging and it’s always placed in the bathroom.

Another member shared that they had a box of latex gloves in the bathroom along with a butter knife.

Others used a “poop pencil” and a “mashitty” but just the same, they related to LearnedButt’s childhood woes.