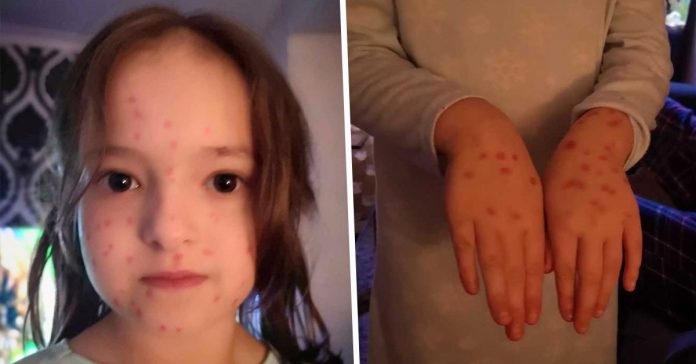 A six year old girl by the name Lily Schooley had an upcoming spelling exam that she didn’t want to do.

Therefore, in order to avoid school that day, Lily thought that it might be a good idea to fake a rash.

After all, most of her class mates had chicken pox and her parents would assume that she also has it and stop her from going to school the next day.

With a nice plan in mind, Lily went home and did her homework as usual.

Since she needed physical evidence to prove that she was actually sick, Lily asked her parents for a permanent red marker ‘to do her homework with it’.

Charlotte, Lily’s mum, gave her the pen without thinking anything of it.

Glad that everything was going according to plan, Lily rushed to the bathroom and began drawing red marks on her hands using the marker. She also drew some on her face.

Perhaps, she thought that her parents wouldn’t realize that she was okay a few minutes ago. Lily then ran downstairs back to her parents and told them that her hands felt itchy.

So, Charlotte goes on to look at her hands. After turning the lights on she noticed the red marker marks on Lily’s hands. Her husband also saw this.

Lily then went in for the final blow and told her parents that she may be having chicken pox. She suggested that she stay home the next day.

The parents played along and acted concerned about their daughter’s condition.

In a sudden twist of events, Charlotte told Lily that they should go the doctor immediately to make sure that everything is fine.

Upon realizing that the jig was up, Lily rushed back to the bathroom to try to wash off the spots and convince her parents that she was okay.

Unfortunately, the marks didn’t come off that easy. Charlotte also tried to help her wash away the marks, but it was futile.

The next day Lily has to go to school with red marks on her face and hands.

Her parents wrote her a note explaining the situation so that she wouldn’t be sent back home for having something contagious.

On that day, Lily learned her lesson. It’s never good to cheat your parents.