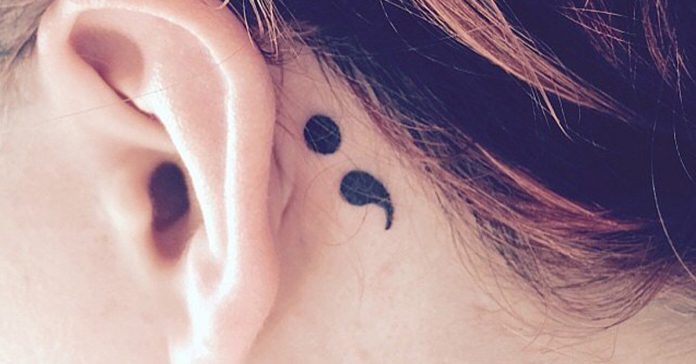 It also exists as a hopeful sign that reminds onlookers that you can recover from mental illness.

But the creation and other nuanced meanings behind this punctuation tattoo.

Keep on reading to learn about how the semicolon tattoo became a cultural staple.

What Is The Semicolon Tattoo? 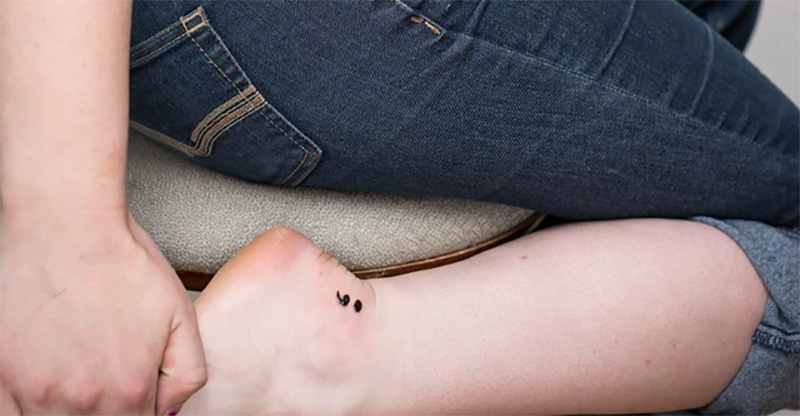 The semicolon tattoo is now trendy among millennials and other age groups, as well. The tattoo itself is usually inked on as an enlarged version of the punctuation mark.

Mostly, you see them done primarily in black ink.

However, other individuals have used “watercolors” and other effects to make their tattoo standout. It’s also sometimes incorporated into a larger tattoo design, as well.

What’s The Meaning Of The Semicolon Tattoo? 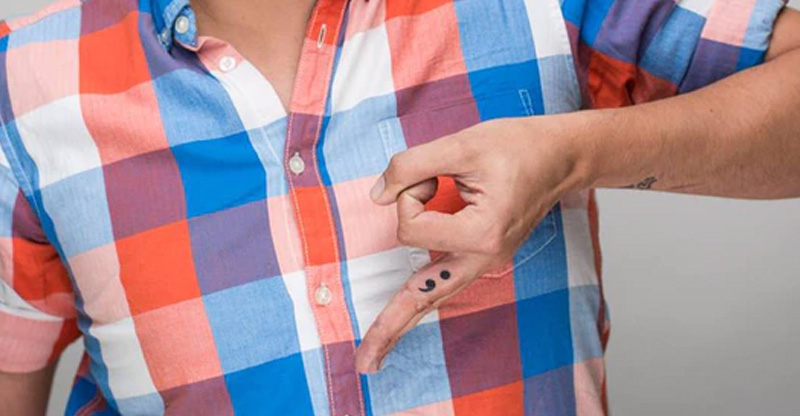 The semicolon tattoo stands as a permanent reminder of mental illness.

In fact, it’s reported that a fifth of all Americans will experience a mental illness at some point in their life.

Most cases will go undiagnosed because of the social stigmas around mental illness.

These semicolon tattoos let people know they’re not alone in mental illness. And that they, too, should seek the help they need without self-judgment.

The semicolon tattoo trend has spurred many mental health support groups. Those members report that having the tattoo makes them feel like part of a community.

They also say these groups give them a sense of community. This feeling of togetherness is often taken away by mental illness.

But What Does A Semicolon Mean?

When used as a punctuation mark, a semicolon separates two thoughts. However, it shows that they both share a common thread.

Regarding mental health awareness, the semicolon indicates that you’re not alone. Because mental illness is just that: a common disease that affects millions.

It also stands as a symbol of hope. In a sentence, a semicolon can also be used to balance out a single thought. Yin and yang to the same idea, if you will.

For people living with mental illness, the semicolon represents the recovery that can follow a diagnosis or episode relapse.

Above all, the semicolon represents a choice to continue living. In recent years, suicide has become of the top ten leading causes of death in the United States.

For those who may have considered ending their lives at one point, this is a powerful message of recovery.

What’s The History Behind The Semicolon Tattoo?

The exact date when the semicolon movement started is still up for debate. However, most agree that it began around 2013.

During this time, social media started gaining massive popularity in the mainstream.

As a result, people began sharing their struggles with mental illness across many platforms.

This public sharing lead some to think about creating a symbol of solidarity between people living with mental illness.

Soon, the semicolon was stamped as the symbol of unity among mental health sufferers.

Since 2013, groups like Project Semicolon and Semicolontattoo.com have become movement leaders.

What Is Project Semicolon And The SemicolonTattoo.com?

The semicolon tattoo trend has given rise to websites and groups. And perhaps two of the most prominent are Project Semicolon and SemicolonTattoo.com.

Here’s more information on each of them to help explain why they’re so important:

Inspired by the tattoo trend, the group Project Semicolon was formed in 2013.

The mission of Project Semicolon is simple: They want to help reduce the rats of suicide in the world.

Like other organizations and mental health professionals, they believe suicide is preventable.

Project semicolon introduces people with suicidal tendencies to communities and other resources. Suicide is often the result of loneliness.

Because of that, Project Semicolon helps create social bonds between mental health sufferers.

The non-profit also connects people who have mental illness to health professionals. They even put on regular events and give free access to their online resources.

The creation of SemicolonTattoo.com was also a result of the semicolon tattoo trend. Like Project Semicolon, it has become a touchstone for many who suffer from mental health.

But as you might imagine, it also serves as a destination for semicolon tattoo ideas.

Considering that these platforms were all started from a single tattoo idea, it’s a pretty incredible thing.

What Should I Consider Before Getting A Semicolon Tattoo?

A tattoo of any kind is a significant commitment. And unless you decide to laser it off later, it will stick with you forever.

Here are a few things to consider before going under the needle:

Consider addressing all those concerns above before getting a semicolon tattoo. The last thing you want is to regret something that will permanently sit on your skin.

Like so many other tattoos, you probably have a slew of questions about semicolon tattoos.

From where they might go on the body to the post-tattoo care they require, there’s a lot to unravel.

Here are a few answers to the most commonly asked questions about semicolon tattoos:

If I don’t suffer from mental illness but want to show my support, can I still get a semicolon tattoo?

Of course, you can! People also get semicolon tattoos to show support of family and friends who have a mental illness.

Where should I place a semicolon tattoo on my body?

Anywhere you want! The placement of your semicolon tattoo is entirely on you. But most people tend to place them on their wrists, behind their neck, or some were on their feet.

What should I do after getting my semicolon tattoo?

Taking care of your semicolon tattoo after it’s done in important. If not healed properly, the tattoo can prematurely fade or even flake off.

Ask your tattoo artist about how to care for the tattoo after you’re done.

Also, get recommendations on specific tattoo-safe moisturizers to use during the healing process.

However, no matter what kind of tattoo you get, it’s best to avoid swimming and bathtub bathing.

Submerging the tattoo in water can cause it to bleed the ink out.

It can even cause infections that might require medical assistance to clear up.

Our Final Thoughts On Semicolon Tattoos

Like getting any tattoo, having a semicolon tattoo on your body is a significant commitment.

But unlike other pieces of body art, the semicolon tattoo serves as an active social and communal statement.

If you have a mental illness, it can serve as a reminder that your never not alone and that there’s always room for hope.

Now that’s a message we can surely get behind.

SEE ALSO:
The World Will Definitely Recognize Why This Mother’s Post About Depression Has Gone Viral