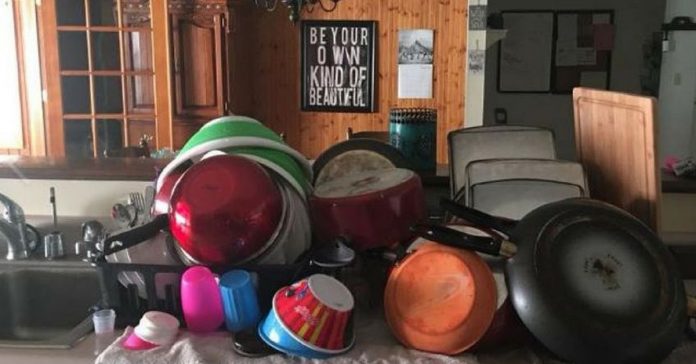 There’s no one way to describe depression and the toll it takes on one’s life. The mental health condition can be extremely damaging and yet so difficult to explain in words – but as they say, a picture is worth a thousand words.

In a Facebook post, Brittany Ernsperger, a writer with The Relatable Mom, perfectly encapsulated what depression can be with a single photo: a picture of a dish rack, stacked full of freshly washed dishes.

Brittany titled her post to say that the photo showed what depression truly looked like. She began by explaining that depression wasn’t the clean dishes themselves, but the huge amount of dirty ones that had just been done.

Brittany hadn’t done the dishes in two weeks. She explained how it had been like for her leading up to her finally getting the dishes done.

Every single time she walked by them, she stared and tried to tell herself that she could and would get them done – yet she didn’t, and each day, she felt more and more defeated by her “failure”.

Just three days prior to taking and posting the photo, she’d sunk onto the floor of her kitchen and cried her heart out. She desperately wanted to get the dishes done, but depression had a hold on her and was drawing her deeper and deeper into its grasp like a black hole would.

Brittany explained that these thoughts constantly plague the minds of those with depression. And it doesn’t help that she also has the anxiety to go with it, which eats away at her and fills her head with fears.

Brittany explains what that’s like, saying she’s terrified her husband will leave her if he thinks that she’s being lazy and that she’s too frightened to let anyone into her home because she thinks they will judge the pile-up as disgusting.

On top of all that, she talked about feeling like a failure when she had to order pizza for herself, her child and her husband for the third day straight because she didn’t have clean dishes to cook or serve food with.

She then added that naturally, the dishes weren’t the only chore affected by her depression. From chores like doing the laundry and cleaning to everyday tasks like dressing herself and her children, taking showers, and brushing teeth, everything is a mountain of an obstacle to overcome.

On some days, she can’t overcome them.

The heartfelt post, which resonated with so many others who suffer from depression, has gained over 140,000 likes and over 170,000 shares so far. She pressed that she was never searching for sympathy – only to make others aware, and to spread the message that depression doesn’t make you weak.

Even the people who seem the strongest may be suffering, too afraid to say anything because they fear being looked down upon.

When she saw the responses she was getting, Brittany was amazed. She hadn’t expected the post to go viral, and she edited her post to offer her help to other women dealing with depression.

She hopes that together, those with depression can help lift each other up.